To do this, tests were carried out with a 350 HP 3.4L V8 engine borrowed from Audi, installed at the rear. The tests proved disastrous because the large V8 engine had difficulty to fit in the narrow space that was normally occupied by a traditional flat six-cylinder engine. On the other hand, the development costs would have been too high. By that time, the policy regarding the evolution of the brand's range had changed so game-over and the only copy ever made was put back in the basement of the museum in Stuttgart.

If it had been produced,  it would have been officially called the 969.

The Porsche 928 was born from the wishes of the Porsche management of the time, in particular Ernst Fuhrmann, to move away from the 911 monoculture.

Indeed, considering at that time that the rear mounted engine architecture had little future, Porsche's managers looked for an alternative and opted for the concept of a GT with a water-cooled front engine.

The latter will be offered to Ferry Porsche on the occasion of its 75th anniversary, in an Olive Green livery, a colour that the "boss" particularly appreciated. 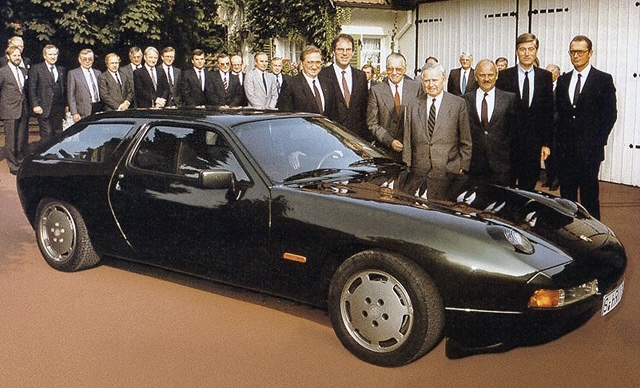 The second attempt of a station wagon was made in 1987, based on a previous 924 S4 prototype developed in collaboration with AMG, the 928 H50 prototype was made, this time with 4 doors.

The 2 rear doors had the particularity of opening in an antagonistic manner, known as "suicide doors". This prototype, judged to be not very elegant, was rejected by the firm's management and shelved in the dungeons.

The idea was close to a model that would appear exactly 30 years later in the form of the Porsche Panamera Sport Turismo.

At the end of the 80s, Porsche was in a relatively delicate financial situation and the need to diversify its model range to another type of clientele was urgently felt.

Porsche finally decided not to produce it because, over and above the initial development costs of 600 Mio DM, production costs would have been close to one billion DM. The estimated selling price would therefore be around DM 80,000 per unit, which would be very difficult to sell at that time.

And another project shelved! Not entirely however, because 21 years later the Panamera was born.

Prototypes aimed for a targeted clientele.

Always in the context of a complicated economic situation, Porsche has developed various projects to meet more specific customer needs.

The project type 984 or "Porsche Junior", started in 1984. The idea was to produce a more affordable, small roadster, in order to target a young and sporty clientele, allowing them to make their entry into the big Porsche family.

It was equipped with a small 2.0L four-cylinder boxer engine, delivering between 120 and 150 HP. The design of the car was remarkable in many ways and equipped with many innovative technological features for this type of vehicle. The brakes of the 911, the steering of the future 964 and the electronics of the 928. A four-wheel drive version was also planned.

The emphasis was laid on dynamic driving qualities in terms of weight, rolling resistance and low fuel consumption. Several body versions were developed, i.e. coupé and cabriolet with a retractable hard-top behind the seats.

The so called « Porsche Junior » made its first laps in 1987, unfortunately it stopped (or ‘the brakes were applied’) in 1988 due to the abrupt fall of the dollar, as the firm had planned to sell a very large majority of them in the USA. Only 4 prototypes were produced.

No regrets in the end, because 5 years later, Porsche presented the Boxster at the Detroit Motor Show, an even more advanced model which brought the firm back on the road to commercial success. 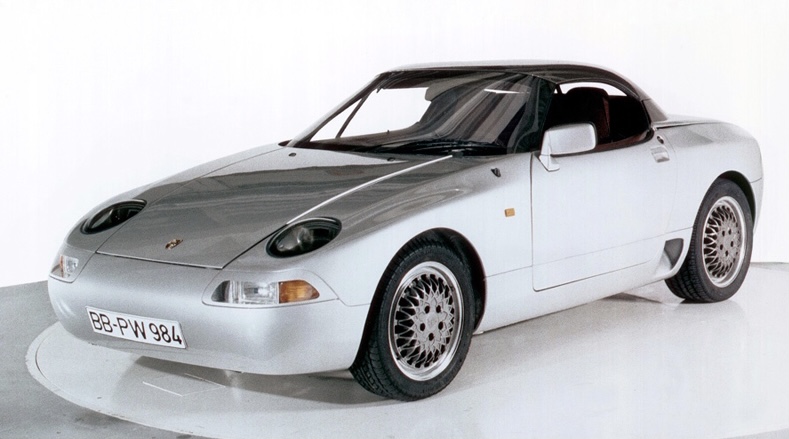 This project is probably one of the most exotic of the brand's projects.

Indeed, Porsche has imagined a vehicle that we would qualify as a hybrid (in terms of bodywork), between a sporty coupé and a buggy, equipped with the engine of the 911 type 964 with 250 HP and four wheel drive.

Designed at the same time as the Porsche Junior, this model was mainly conceived for the Californian market. As the dollar crisis had still not gone away, the project was also aborted (or ‘parked’), as Porsche had to make other priority investments to ensure its financial future.

2 cars were built. One of them was offered to Ferry Porsche on the occasion of its 80th anniversary.

The launch of the Porsche Cayenne (type 955) at the Paris Motor Show in 2002 was definitely a turning point for the brand, as well as a certain astonishment for the customers.

What an idea for a sports car manufacturer to include an SUV in its range of models?

The future proved that Porsche was right to produce this type of vehicle, which is still a real commercial success to this day.

More surprising, and less well known, is this study of the Porsche Cayenne convertible with the typical Targa roll bar installed behind the rear seats.

Born in 2002, this three-door four-seater prototype remained very discreet behind Porsche's closed doors. With more classic proportions, four doors, it laid the foundations for the Cayenne we know today.

The future is today!

The full list of all Porsche prototypes since the creation of the brand will probably never be made public.

Only those projects that truly anticipated production models, some of them many years later, are the most famous.

Closer to this time, the Mission-E prototype, future Taycan, will once again fundamentally reshape our conception of the sports car. Porsche will never stop to impress all of us, because the future is today!