The attribution of paternity of the Porsche logo still raises many questions to this day.

Numerous stories and legends still feed the controversy as to whether the legendary designer Erwin Komenda or Ferry Porsche is the author of the famous company logo.

According to Dr. Iris Steineck, Erwin Komenda's granddaughter, claims that Erwin Komenda created the Porsche logo in 1952 based on the contents of a handwritten letter written by his grandfather.

Erwin Komenda worked for many years at the service of the Porsche family, and made a major contribution to the history and success of the brand, but the Stuttgart manufacturer claims that he is not the final author of the Porsche logo and attributes the origin of the crest to another famous designer employed by the Porsche company.

An anecdote reports that the Porsche logo was born on 25 April 1952, during a meeting between Ferry Porsche and Max Hoffman in a restaurant in New York.

Max Hoffman - European car importer for the USA - suggested Ferry to create a logo for his company (which did not yet have one), inspired by the Cadillac emblem. Ferry draws a first sketch of the future logo on a piece of the restaurant's napkin.

At the same time in Germany, Baden-Württemberg was merging with the federal states of Baden and Württemberg-Hohenzollern, and Ferry was largely inspired by the various flags and crests of these states to design its brand emblem.

Back in Europe, Ferry commissioned Franz Xaver Reimspiess - an engineer working in the Porsche Design department headed by Erwin Komenda - to work on the sketch of its logo. Is this the source of the controversy?

Nevertheless, Franz Xaver Reimspiess took the sketch that Ferry had made in broad strokes, improved it and fine-tuned the visual future of the brand. The company's management validated it and the Porsche logo was born. For the first time, a logo appears in the centre of the steering wheel of a Porsche 356 at the end of 1952.

There are sometimes questions about the similarity of the horse in the centre of the Stuttgart brand logo with the one of another brand of Maranello sports cars.

The Ferrari "Cavalino rampante" was originally painted on the fuselage of Francesco Baracca's fighter plane, Ace of Aces of the First World War, and was taken over by the Italian firm to be incorporated into its logo. The yellow background is the colour of the coat of arms of the city of Modena.

The various elements of the Porsche logo reflect the origin of the name "Stuttgart", which in old High German was "Stuotgarten". "Stuot", today "Stute", means mare. The term "Garten", which means garden, refers to the large area covered by this Länder before the area was settled.

The Porsche logo is therefore a combination of the following elements:

1. The mare as the emblem of the city of Stuttgart

2. The horizontal red and black colours of the former state of Württemberg

3. The deer antlers of the Württemberg family coat of arms

4. The inscription of the trade mark in capital letters

The design of the logo has certainly evolved over time, but has always kept to this day the DNA of its original characteristics since 1952. 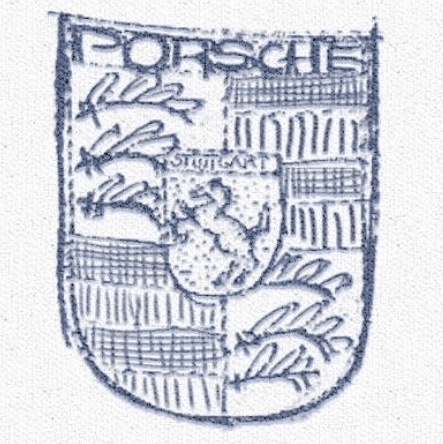